Deprecated: Non-static method JSite::getMenu() should not be called statically in /home/streampl/public_html/templates/gk_storefront/lib/framework/helper.layout.php on line 152

Deprecated: Non-static method JApplication::getMenu() should not be called statically in /home/streampl/public_html/includes/application.php on line 536 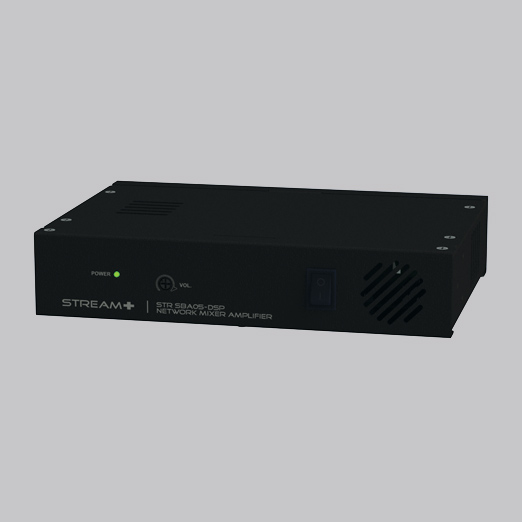 The STR SBA05-DSP 2 x 50W Network Audio Mixer Amplifier receives and decodes IP audio streams with a built-in 2 x 50W amplifier. The unit is designed to power low impedance speaker systems for the distribution of high quality background music and paging announcement. The STR SBA05-DSP also has provision for one local Auxiliary and one Mic input to be connected directly to the unit. This makes the unit highly suitable for classrooms, conference rooms and small lecture hall applications where a local PA system is required. The STR SBA05-DSP comes with on board DSP feedback suppressor, which makes the unit exceptionally useful when used as a local PA system. The DSP feedback suppressor feature can be configured or switched on or off via the LAN/WiFi using the Stream-Plus App. With the UCX Software Framework that is sold separately, system integrators can create User Interface to control multiple Network Amplifier devices, configuring the output volume and what streaming channels they ‘listen’ to. This is particularly useful for the audio routing destination zone selection.